Snowboard boots, getting the right pair for you.

Snowboard boots are relatively straight forward, technologically speaking and consist of two main parts, the outer boot and the inner liner. They are a lot softer than ski boots, but are still very rigid compared to even the stiffest walking boots. They are designed to transfer your weight towards the toe and heel edges of the snowboard. Their rigidity is achieved through inserts in the back section of the boot (acting as a backbone) and lacing to pull the front of the boot tight around the liner.

The fit is paramount when buying snowboard boots as badly fitting boots will give your feet serious grief after you have been on the slopes for a few hours, let alone a full day. Your heel should be held firmly in the heel of the boot with little to no movement. Your toes should not feel compressed by the end of the boot but should touch it when stood upright (on your heel edge) as when leaning forward the foot will move slightly backwards (on your toe edge). The snowboard bindings will offer some additional tightening, but it is far better to start with a really good fitting boot.

Liners are the softer inserts used to create a precise fit and comfort. Just like in ski boots, the liners are normally heat moldable to achieve a perfect fit. Liners feature an independent fastening to the exterior boot, these vary from pull tighten laces with securing clasp, to Velcro straps or Velcro pads.

Traditional laces are predominantly used in snowboard boots as they can be adjusted precisely and are cheap to manufacture. Although tying laces with thick ski gloves, or frozen digits can be a bit of a challenge even for the most dexterous of hands.

Quick pull laces are a fast alternative to traditional laces where by pulling on a handle, that has the laces attached, tightens the boot. The laces are kept tight by a securing clasp and the excess lace can usually be stored neatly on the boot.

The 'Boa' lacing system is made to take the fiddly-ness out of doing up or tightening your boots when out on the slopes. A dial is used, and when twisted, pulls the wire lacing tight. To undo or loosen the boot the dial is pulled outwards , releasing the wire, allowing the tongue to be pulled outwards. There are also combinations, 'Double Boa' systems and lace plus Boa systems are all available that tighten specific areas of the boot. 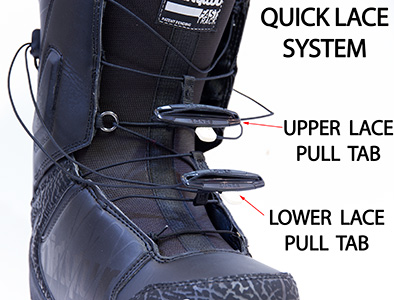 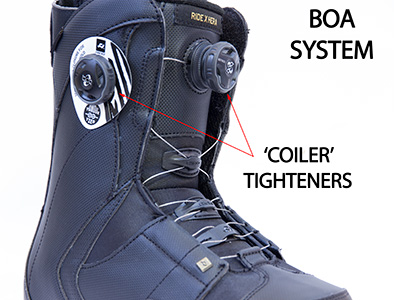 The flex of a snowboard boot is measured on a scale from one to ten, one is the most flexible and is perfectly suited to beginner boarders and freestylers. More flexible boots are more forgiving and tend to catch an edge less easily lending themselves to jibbing and buttering tricks. Less flexible boots are used by experienced riders and boarders who like spending their time in the park. Stiffer boots offer more support for your ankles when landing jumps and travelling at very high speeds. The stiffer the boot the more responsive it will be at getting the snowboard from edge to edge.