Anatomy of a Tent

The 'berth' of a tent is a guide the manufacturers give to a tent in regards to how many people the tent can sleep. When choosing a tent it is a good idea to remember that this is just a guide advising you how many people it is possible to sleep, not how many it is practical to sleep. For example, most one man tents are only big enough to fit one person full stop, no allowances are made for 'wiggle room' or storage of gear. The gear you do have with you will, more than likely, have to be left outside of the tent where it will be open to the elements. Some tents feature a small area where gear can be stowed and kept out of the rain between the inner tent and flysheet. The same can be said for all berths of tents so if you would like to comfortably sleep two in a tent, we would always suggest a three man tent and so on. In larger four man and up tents there is normally a lot more living and storage room provided. 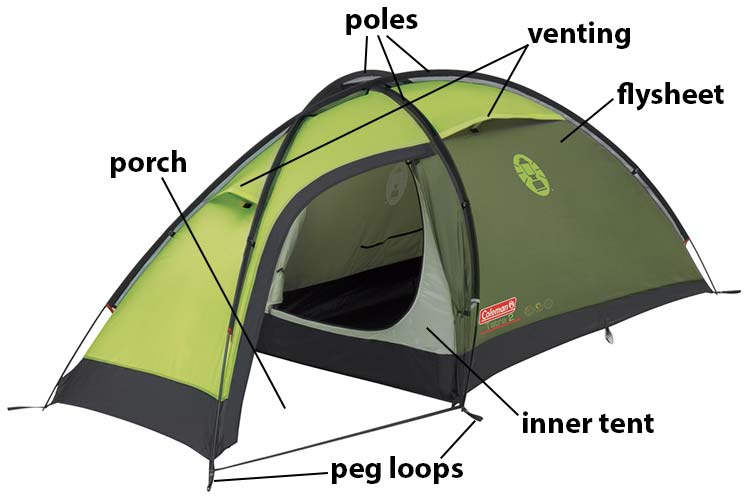 The flysheet is the outer layer of the tent. This is what protects you from the wind and rain. This outer layer needs to be waterproof to a certain extent and the water repellency is measured, and referred to, as the 'Hydrostatic Head'. The waterproofing is vastly improved by applying a coating to the flysheet which is normally Polyurethane (PU) and sometimes Silicone elastomer. Anything deemed waterproof has to be able to withstand the pressure created by a column of 1 inch by 1500 mm (definitions vary considerably). Ratings vary between 1000mm and upwards of 20,000mm, the higher the rating the worse the weather it can withstand. Generally speaking a H/H of 2,000mm would be sufficient to cope with year round weather conditions in Europe and most tents are engineered to have a higher H/H as a matter of course.

The inner tent is, as the name suggests, the inside compartment of a tent where you sleep. This is made of a breathable material, or at least features venting in the form of mesh panels, that allows moisture to escape preventing condensation forming on the inside of the tent.

The groundsheet forms the bottom of the tent and is made with harder wearing fabrics compared to the rest of the tent, it has to be able to withstand rough ground without tearing. Due to the tougher fabrics used, the ground sheet also has a higher waterproof rating. Some invest in a an additional groundsheet to go under the tent, also known as a footprint, that further protects the bottom of the tent from dirt and tears.

Most modern flysheets and inner tents are made of a combination of nylon and polyester fabrics that offer good waterproofing and are lightweight. The weight of these fabrics is measured by 'denier' which is the fabrics 'linear mass density of fibres' defined by mass per 9000 meters weighed in grams. Therefore the 70 denier fabric found in the Vango Capri 500 tent has threads that weigh 70 grams per 9000 meters.

Most tents feature taped seams on the flysheet and groundsheet that provide a watertight seal. This is vital, by sewing the two sections together any waterproofing is effectively nullified by the holes being punched through the fabric. To reseal these holes a tape is applied that is then melted or ironed on create a watertight barrier over the entire seam. Aftermarket seam sealers are widely available in the form of sprays and tapes which will repair any damaged seams but it would be difficult to waterproof seams that were not originally factory taped.

Most tents feature openings that have two zips so they can be opened in either direction.

Pegs are what you use to secure your tent to the ground through pegging down the tent itself (through) loops and via the guy lines. They are made of different materials including plastic, which are larger and do not rust. Steel, which are cheap and robust and metal alloys which are extremely light. They also come in different shapes such as round, flat, v-shaped, twisted and three sided stake. Each are meant to perform better in different types of ground with the wider, larger pegs offering better hold in sandy or lose soils and heavy duty pegs are for harder ground.

These are thin ropes that stabilise your tent by pulling the tent taught. Some guylines feature bright reflective colours to increase their visibility and prevent being a trip hazard.

While weight is not an issue if you are only carrying the tent a few meters from the car to its pitch, it is if you are intending to travel any real distance with it. Backpacking tents vary considerably in how much they weigh, higher end tents feature lighter fabrics and poles by utilising composite metals and hi-tech fabrics. This technology comes at a price though, an entry level hiking tent that weighs 1.85 kg can be picked up for as little as £50. To get sub 1 kg, however, the price jumps to £200 and up.

Adding a carpet to a tent really adds a luxurious feel as well as adding a layer of insulation between the ground and the floor of the tent. Its not a necessity but it really does make the tent more comfortable.

With some models of tent it is possible to buy a front or side extension which provides extra living and/or storage space. This can be advantageous as buying an extension would be far cheaper than buying a whole new tent if you needed more space.

This might seem a strange thing to give any real consideration, but mountaineering  tents are bright in colour for a reason. Brighter colours are easier to spot if in need of rescue, something to take in to account when planning trips well of the beaten track. On the other end of the scale wild campers might want to blend into their surroundings more, maybe with the intention of not disturbing wildlife. For family and leisure tents colour is mainly down to personal taste, although darker colours will  attract slightly more heat. Colour cast might also something to consider as you may feel happier in a green light than a blue.

Ridge tents are the stereotypical tent design with vertical tent poles at each end, a supporting pole that runs along the top and guylines that pull the tent out into a triangular shape. This traditional tent design has predominantly been dropped by tent manufacturers that instead favour shapes that give more usable space. 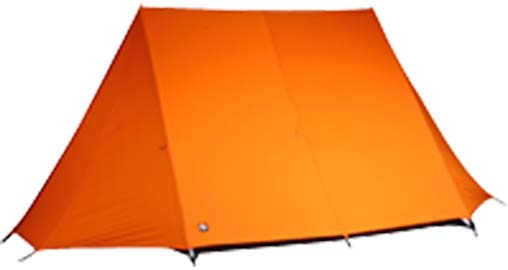 Dome tents are now the most common tent design, featuring two crossing poles that, in smaller tents, provide excellent stability in windy conditions. These freestanding tents are easy to pitch and are fairly lightweight making them a great choice for those looking for a short stay or entry level hiking tent. 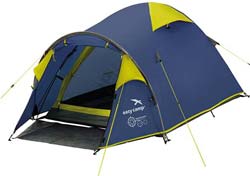 Similar to the dome tents shape, geodesic tents feature two additional crossing poles on either side that significantly increases stability in extreme weather conditions. Geodesic and semi-geodesic (one additional pole) are the choice of wild campers, hikers and mountain climbers who are more likely to encounter harsher environments.

The elongated arched shape of tunnel tents optimises the usable interior space of the tent making them ideal for longer duration camping trips and families. As they are not freestanding and pitching them takes a little practice but the extra height and living space they provide can offer a spacious and luxurious camping experience.

Inflatable beam tents have been around for a while now and they are fast becoming the most popular choice of larger tents. They take the form of a tunnel tent but the sewn in inflatable poles are extremely quick to inflate and pitching times are significantly reduced. Another benefit of inflatable tents is that due to the inherent flex of the pole they stand up amazingly well to strong winds, especially when used in conjunction with an additional system such as Vango's Tension Band System. 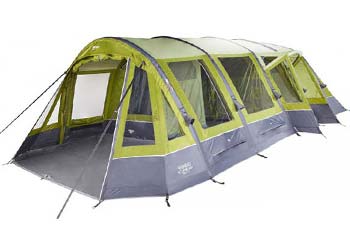 Want a tent that can pitch in seconds? Pop Up tents can literally be thrown into the air and pitch themselves, all that needs to be done is peg them out. Pop Up tents are generally small in size and do not offer much in terms of features but their ease of use makes them ideal for festivals and shorter duration camping trips.

Tents for Ten Tors or Duke of Edinburgh participants would be best suited to a backpacking style tent that has a small packsize, is lightweight and can stand up to the elements. The design of these tents differs quite a lot with geodesic/semi-geodesic and different variations of wedge deigns that specifically cater to different environments or preferences.

There are many large styles of tent for larger groups, from dome, tunnel and inflatable tents to octagonal tents. It is important when choosing your tent to consider how you would like to use the tent i.e. how much living space you want and so. After all, rainy days on holiday are, unfortunately, quite likely and feeling claustrophobic will only make the day that much worse. Also, as already mentioned, the berth of the tent is normally how many it is possible to sleep so if you like a little more privacy than three in a bedroom its worth going for a slightly larger berth tent.

When camping at a festival it is more than likely the tent is going to get a little abused especially considering the close proximity of other campers. We would suggest a quick pitching tent that can sleep the amount of people in your group comfortably. Not to focus only living space (although this is personal choice) as not a great deal of time will be spent in the tent.

Cleaning and proofing of a tent will significantly prolong the life of the tent as any, overtime, will lose some of its water repelling ability. Re-proofing is easily applied either by a spray, cloth or a brush.

Safe Use of Your Tent 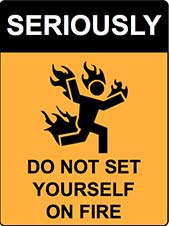 A fire in your tent is a true nightmare scenario. All modern tents are labelled as fire retardant but simple and commonsense rules should be followed.

Carbon monoxide is produced by burning fossil fuels i.e. cooking. The gas is odourless and lethal (known as the silent killer), with subtle symptoms including tiredness and often, slight nausea. Best practices are to follow the bullet points above in the fire section.