If you are looking to buy a new pair of ski boots we would recommend that you come and visit us in store and have them fitted by one of our fully trained ski technicians. They will be able to advise you on choosing the correct ski boot for your ability and skiing style. We also offer a full fitting service including liner moulding, custom shells and boot stretching. All of these services are free when you purchase a pair of ski boots from us and come with a correct fit guarantee in the unlikely event of further adjustments being required.

It is important to be honest with yourself when evaluating your skiing ability. Having  ski boots that are designed for a level you have not yet reached will impede your progression as a skier and more importantly, stop you having as much fun. Equally, a competent skier using a entry level ski boot would also be restricted and not progress as quickly as they might skiing a boot that is not as responsive. Below we have broken down skiing ability into three levels.

The shell of the ski boot is normally made from Polyurethane or Polyether plastics and serves as an exoskeleton, a strong outer layer that secures you to the ski binding and ski in turn. Ski shells are normally offered as a two piece design consisting of a 'Clog' section for the foot and the higher 'Cuff' section for the calf and these are connected by a pivot. The upper cuff flexes through a pivot point and flexes on to the lower clog, relying on friction for its stiffness.

The relatively new three piece shell design has an additional tongue section and connects to the clog lower down than in a two piece shell, pivoting nearer where the foot would naturally pivot. This additional tongue gives a more consistent flex and results in less distortion in, and around the instep area of the boot. The tongue also acts as a sort of suspension, preventing 'shin bang' and adding 'pop' that suits the more extreme style of skiing where jumps and heavy landings are commonplace.

Some Salomon ski boots offer an oversized pivot which gives more down force overall by distributing pressure throughout the boot, instead of primarily through the heel (see image below).

Another new development is the introduction of heat mouldable shells. Just like the mouldable liners this is done to achieve a perfect fitting boot but a moulded shell will keep its form better as it is a rigid material. The shell is moulded by first being heated to around 80° C and then being worn by the skier fully fastened for around 30 minutes. 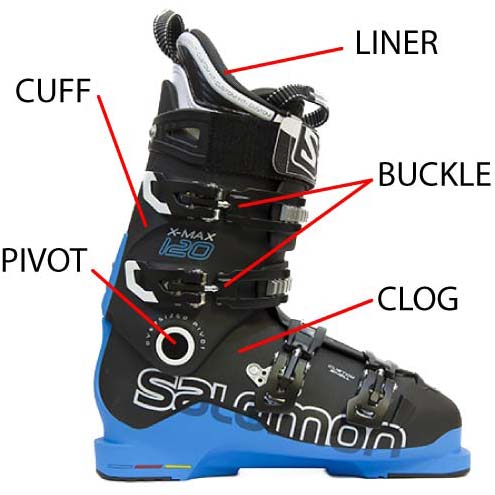 The liner is the inner soft part of the boot that lies between the hard outer shell and the foot and calf. Liners vary between manufactures but are normally well cushioned and insulated to provide comfort and warmth. There is a trade off however, generally the thicker and more cushioned liners sacrifice performance and more performance liners are not as cushioned and have harder foam.

Most modern liners are capable of being heated and moulded to the shape of the skiers foot, this is done to achieve the best fit and support possible. This heat moulding makes a vast improvement in the comfort of the ski boot as everybody's feet are different and is amplified by the fact there is no give in a ski boot. So having a precise fit will not only improve comfort but performance in turn. 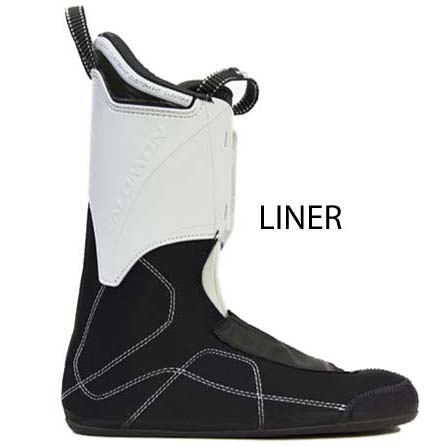 The 'Last' refers to the width of the fore foot at its' widest in a slightly diagonal direction. These last widths can roughly be broken down in to three groups of Narrow, Average and Wide. Narrow lasts however, are not only for people with thinner feet but are preferred as a higher performance option as it gives more responsiveness.

The flex of a ski boot refers to how much movement the boot offers in a forward motion. In a stiffer boot with less flex it would be harder to bend your ankle as it would actively prevent the natural movement of the ankle. A softer ski boot with slightly more flex would generally be worn by beginner skiers as they are more forgiving and less responsive. Very stiff ski boots with no flex would be worn more experienced skiers looking for higher performance values from their ski boots. Flex is rated on a scale from 50 - 140, 50 being the most flexible and 140 and above, very stiff and inflexible. 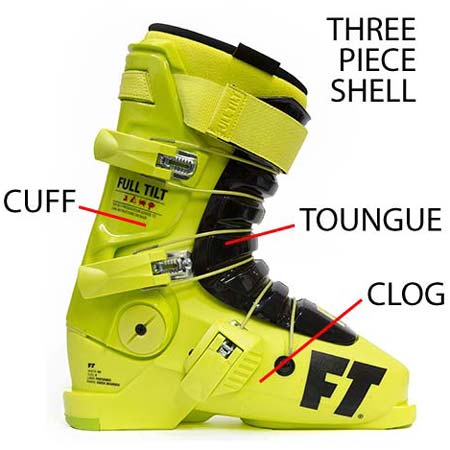 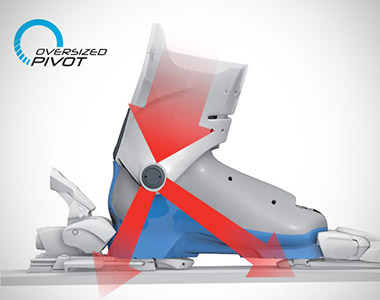 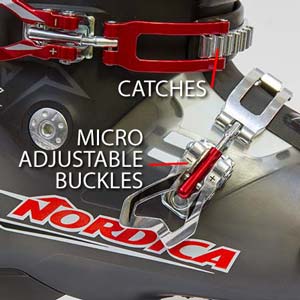 As any of those who have skied before will know, walking in ski boots is hard work due to the stiffness required for skiing. Some new ski boot manufacturers have started to introduce walk/hike modes that allow an easier walking motion by permitting the ankle movement in a backwards. This obviously makes getting to the lifts a lot easier but these models are also perfect for skiers who like to hike in the backcountry to access fresh powder.

'Mondopoint' is a ski boot specific measuring system that measures the length of the foot in centimeters and sizes are split down in to half sizes i.e. 26 - 26.5 and so on.

Canting, which is also known as cuff alignment, is the sideways angle of the cuff. If the skier has a bow legged stance then the angle can be adjusted outward to allow for this. Alternatively if the skier has a knock kneed stance where the knees are closer together, the canting can be brought in. Not all ski boots feature the ability to adjust the canting, instead using 'Lifters' or cantered footbeds that are pads attached externally to the toe and heel of the boot to tilt the boot in or out.

The buckles are used to close the ski boot and feature an arm that latches on to a catch on the other side of the boot. The buckle is then pulled back on itself 9over centre buckle) to pull the boot tight. Most ski boots have four buckles, with two on each the cuff and the clog. Some boots have just three buckles, instead using an oversized buckle in place of two smaller buckles with the idea of saving weight. Needless to say, the build quality of the buckles and the materials used will vary with the price of the boot. Higher end boots will feature micro adjustable buckles, made of aluminium where cheaper boot buckles may feel bendy by comparison.

Footbeds / Insoles
All ski boots come with footbeds/insoles to support the sole of the skiers foot. It is common for the footbeds to be replaced by custom footbeds that can be moulded to the shape of the foot more precisely. This helps combat fatiguing of the feet as support is provided equally across the sole of the foot.