When purchasing a snowboard the chances are that you’ll come across a lot of terminology that may be new to you and this can be both daunting and confusing. To try and help you out, to make sure that you get the correct board for you with the right features, we have compiled a guide to the common terms and features, what they mean, and what you should be looking for to suit your style of riding.

First things first, it’s important to know your snowboarding ability level in order to make sure that you choose the best snowboard for you.

The rocker (also known as reverse camber) is the shape of the board, not dissimilar to the shape of an upside down boat hull, and it produces better float in soft snow. It also helps to initiate a turn more easily, with a decreased risk of catching an edge. A rocker helps a wider board to stay manoeuvrable. A board with a rocker is great for riding in powder, as well as great for the park due to less chance of catching edges. A rockered board is great for a beginner, but also for the advanced rider.

Camber is the traditional shape of snowboards, and it is similar to rocker, only the other way round. So this time it is in a curve similar to a rainbow shape. The camber shape is in the middle of the board. When the board is unweighted with the contact points are at either end. Turn initiation needs to be more precise and a cambered board is great for boarding the piste and harder snow. When stood on a cambered board, there is even, concentrated pressure on the edge, from tip to tail. This produces better edge hold and pop. Due to this, a cambered board is often preferred by racers and high-level park riders.

Nowadays there are many boards that combine both camber and rocker/reverse camber. These boards combine both elements to create a versatile ride, or to really push the barriers in a particular style of riding. So, depending on how the rocker and camber is incorporated you could have a board that excels in park, freestyle, powder, or even a great all rounder.

To make sure that you choose the right board for your needs, you need to know the type of riding that you’ll, mostly, be throwing your board through.

There are several different board shapes, each to cater for a different style of riding. They are as follows:

As mentioned previously, some board shapes differ at the tail and nose. A twin-tip is the same shape at both tip and tail allowing it to ride both forwards and backwards and therefore lends itself more to the rider who wishes to ride freestyle or park. Directional boards are designed to be ridden one way only, which make them a good choice for the freerider.

As a very quick guide to choosing your snowboard length, as a rule of thumb, you should try and choose something that comes up to between your chin and nose. This is a very broad way to choose your length, and the more serious rider should really take weight as the integral factor, and certainly boot size (regarding the width of your board) into account, as well as the type of riding for which you require your board.

Below are some sizing guides for the various boarding styles: 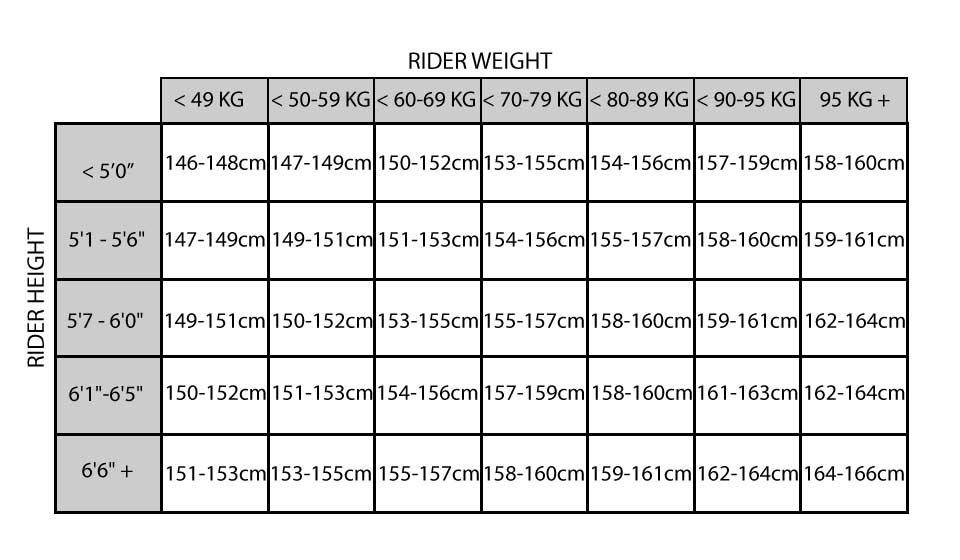 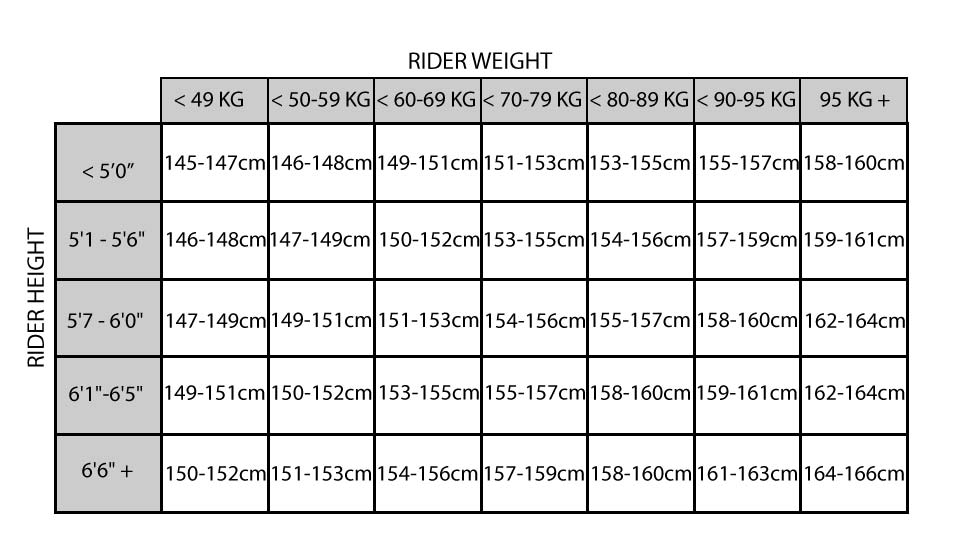 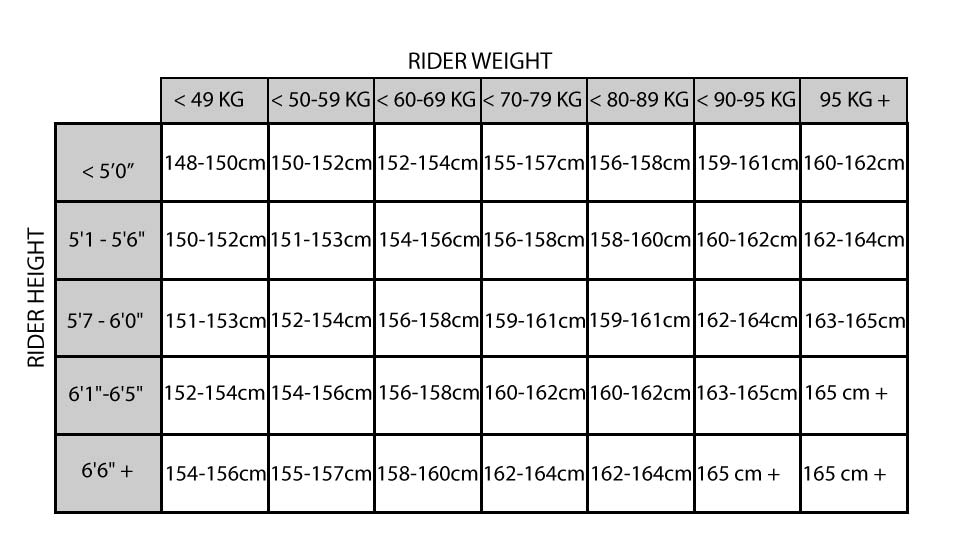 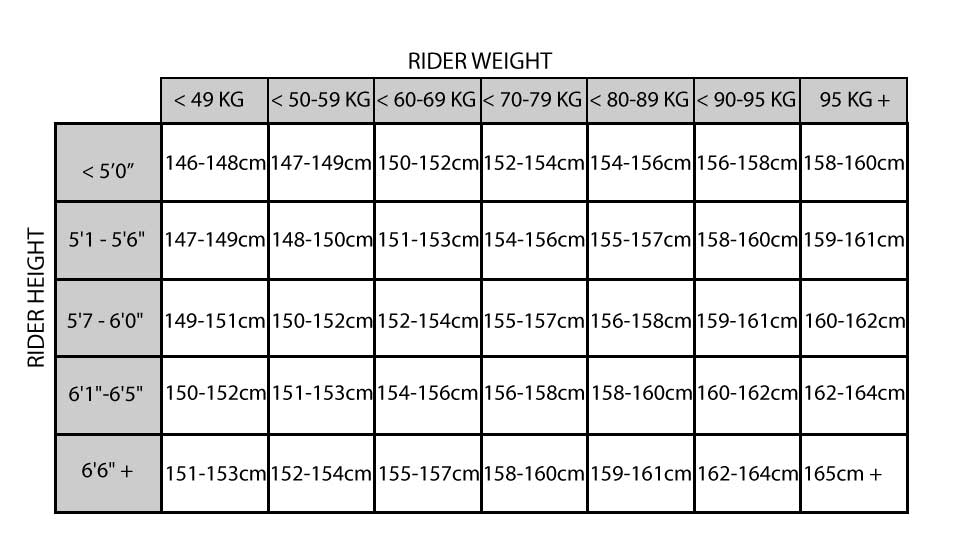 As a basic rule softer flex is more manoeuvrable and forgiving, and therefore favours the beginner or someone that loves riding the park. A stiffer board requires more precision and is therefore a good choice for the intermediate to advanced boarder.

The underneath of the snowboard is known as the base and is made from polyethylene, a type of plastic, in the form of pellets. The difference between the two types of base is solely in the manufacturing processes used. 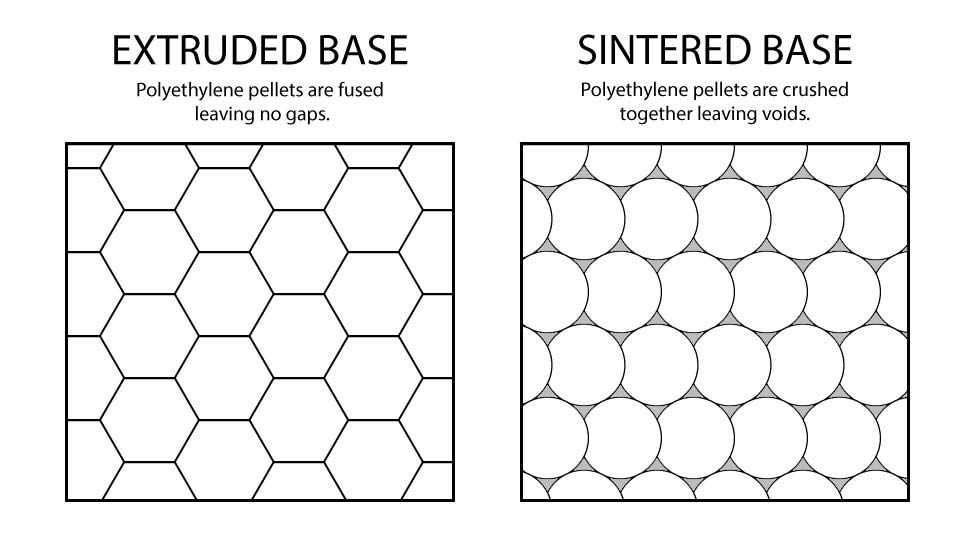 Sintered Base
A sintered base, being crushed to gain its' form, has small holes and is slightly porous because the pellets have not been fused together. These holes allow a far greater wax absorption, and as a result the snowboard is a lot faster than a snowboard with a extruded base.